GCYouthMinistries.org is a website of the Seventh-day Adventist Church.

Seventh-day Adventists are devoted to helping people understand the Bible to find freedom, healing, and hope in Jesus. 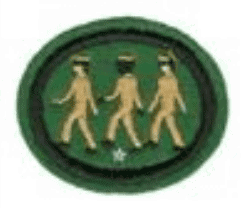 1.      Have a Drilling and Marching Honor.
2.      With a unit guidon demonstrate the six basic positions:
a.       Order Guidon
b.      Carry Guidon
c.       Salute at Order
d.      Salute at Carry
e.       Present Guidon
f.       Raise Guidon
3.      Demonstrate how and when to use the guidon’s basic position during all drill commands.
4.      Be a member of an active drill team that has performed at least twice in the past year in a special community, conference, or public activity.
5.      Demonstrate ability to keep in step with the drill team and move as a part of it at all times.
6.      As a member of a drill team do four fancy (precision) drill routines, at least one of which includes combination commands.
7.      Command a drill team of at least four people, putting the team through basic maneuvers, starting directional commands on the proper foot, and distinguishing between preparatory commands and commands of execution.
8.      Command an entire Pathfinder Club in at least ten basic drill movements.
9.      With a unit (or a selected flag guard) formally raise and lower the national flag at a summer camp ceremony, a special Pathfinder meeting, Pathfinder Day program, camporee, or some similar program or ceremony. Also demonstrate posting the national and Pathfinder flags.